This is Paul’s third guest blog post for Beyond The Wild Garden and this time Paul is updating us on what has been happening in his vegetable patch during July. Make sure to check out his first blog post here to learn about Paul and why he is growing his own.

I finished my last blog post for Beyond the Wild Garden by saying let the battle of the weeds began. That has basically summed up what the last month has been about, trying to keep on top of everything. The heat during June has meant that planting turned into a mammoth watering task and as a result still hasn’t been completed. Cabbages have just gone in and the leeks will be done by the end of the week. All the tomatoes were planted after a re-shuffle of the polytunnel and they are doing really well. They need constant tying in and pinching out of the side shoots to produce a main stem, for the fruit to form along.

The dry weather was very helpful in keeping the weeds at bay and when hoed or pulled on a hot day they withered and died in hours. It gave us a chance to catch up on the weeding and get everything back in order. 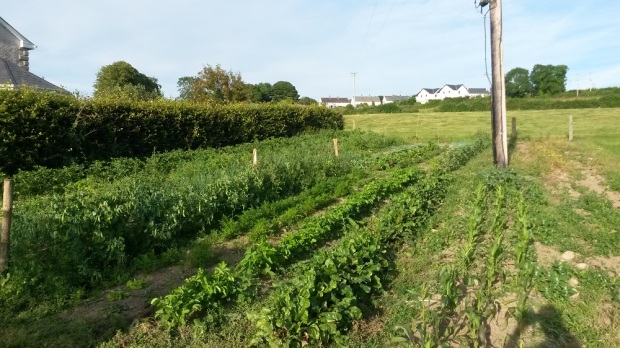 We have stated harvesting too. The potatoes were dug at the beginning of July and are the best we’ve had in years. The earlier varieties seem to have suffered from the lack of water, but are still producing a decent crop, they also got a bit weedier, but as there will be dug out in the coming weeks I’m not worried. The main crop roosters have thrived and are looking to be the best potatoes I’ve ever grown.

Potatoes aren’t the only thing that I’ve harvested. The Peach tree was laden, despite its neglect. The golf ball size peaches were the best I’ve ever tasted. Unbeatable! The smell in the glass house on a warm day was lovely too.

All of the fruit bushes have been harvested since the beginning of the month and are just finishing up now. Everything is slowly coming along. Peas, beetroot, courgettes, and lettuce have all been harvest in small quantities too. That one thing I have learnt is Don’t wait until something gets bigger , pick them when there small and tasty or you’ll soon have monster marrows and turnip size beetroot, still perfectly usable, but they taste  so much better when they’re small. By the time the end of the month comes anyone unfortunate enough to visit, friend or foe, gets a bag full of courgettes, beetroot, cabbage, potatoes and whatever else is producing a glut!

My sweetcorn experiment hit  a brick wall when the F1 variety that had been kept inside two weeks longer than the home saved seedlings, got battered one windy night. The have recovered though and let’s hope they will produce fruit. In saying that, they are all very small perhaps due to lack of water. 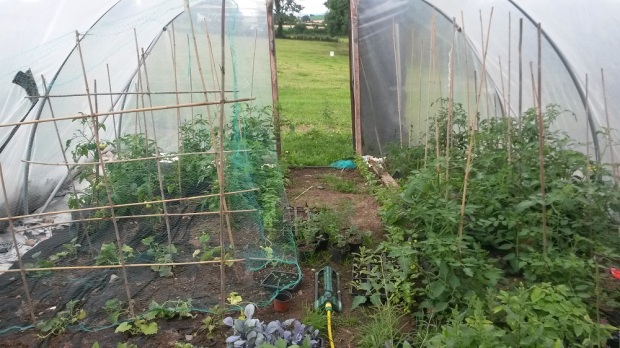 Watering is one thing I never do, for a number of reasons. Watering plants that are established takes hours on an area this size. Plus I don’t’ like wasting massive quantities of water. I already use a fair bit on tubs, pots and in the tunnel. We do have a natural spring supply connected to the tunnel but the pressure of this is poor as it’s all gravity fed and actually has to go uphill a bit to get to the tunnel! It’s very handy though and has a constant supply. I’m looking forward to the coming month where everything becomes ready to harvest and every meal is from the garden.

Paul is a 21 year old horticulturalist who has just finished his final year of BSc Horticulture course in Waterford IT. Paul grew up in rural Co Carlow on a small farm, and had an interest in horticulture from a young age. He loves anything to do with plant propagation, in fact anything that involves being outdoors in general! He is the official head gardener at his house, where he manages the vegetable garden and around the house, which has seen its lawn gradually getting smaller and poly-tunnel get fuller as his interest in growing food and plants grows!